As you are well aware, the negotiations for GDUFA II have culminated in the release of the new GDUFA II Goal Letter and has improved (at least on paper) the chances for additional improvement in the speed of generic drug approvals.  The initial overall baseline price tag for GDUFA II (starting on October 1, 2017) will be $493.6 million up from the initial $299 million based for GDUFA I.  Now hold on, before you get upset, as with inflation and adjustments the FY 2017 figure for the last year of GDUFA I was $323 million. While this is still a hefty increase, the Agency is budgeting more towards the record 1000 ANDAs/year it received under GDUFA I rather than the 700-750 ANDAs it anticipated each year.

The higher number will include some new fees as well as the removal and adjustment as to when fees will be due for some older fees.  How the numbers will come out will not be known until sometime in the latter half of FY 2017.  Why?  Because FDA must obtain from the industry additional information on how many ANDAs each entity and its affiliates have in order to properly assess the new yearly Program Fee.  To do this, FDA will be asking firms to review a listing of ANDA applicants/sponsors and “clean up” or “consolidate” listings according to the affiliate relationship.  Failure to perform this task may result in a firm with affiliates paying additional fees.

The new fee structure (obviously without final amounts) were presented at the GPhA Fall Technical Conference in Bethesda over the last couple of days.

FDA announced that there will be no more Prior Approval Supplement (PAS) fees once GDUFA II kicks off and that there have been changes in how some of the other fees will be assessed (see chart below).

And the new Program Fee is explained below:

The changes in how the fees will be allocated across the individual different fees are shown below:

So the price of doing business is going up, and as the prices rise, so will industry’s expectations.  Here are the target revenues for each overall category of fees, as presented by FDA. 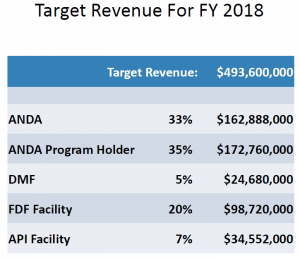